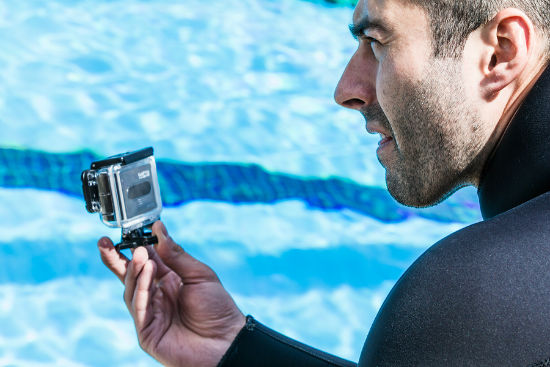 The popularity of action cameras such as GoPro is helping boost online camera sales at a time when people are increasingly using smartphones instead of point-and-shoot cameras to take photos.

People are using their smartphones for day-to-day photography and quickly sharing the photos or video footage via social media.

The industry analysts estimate the Australian photographic equipment retailing industry’s revenue has fallen by an annualised 4.4 per cent over the past five years, to $640 million in 2015/16.

In contrast, it expects 7.1 per cent annual growth for the online camera and camcorder sales industry over the five years to the end of 2016/17, to $255 million.

Mr Ledovskikh said smartphones will continue to eat into camera demand, given the convenience of having one multifunctional wireless device and the ability to easily share photos via social media.

“Camera manufacturers need to make sure that they’re keeping up and that they’re able to meet that social media demand,” he said.

“That provides a huge advantage for smartphones which are already advantaged in that they are incorporated into a device that you already need and they’re often more portable than your regular digital camera.”

Action camera group GoPro and Periscope teamed up earlier this year to allow for live streaming of GoPro feeds, which Mr Ledovskikh described as a positive move.

“I think that’s important – finding ways to make camera products integrate with new consumer demand for social media, for streaming, for sharing your videos and photos instantly with your friends,” he said.

“Of course, that’s outside of the retailers’ hands so they will rely on manufacturers coming up with improvements that allow them to boost sales.”

While smartphones are handy for taking selfies, lightweight and wearable action cameras like GoPro have the edge when it comes to shooting a video while riding a bike, surfing or climbing a mountain and have managed to carve out a niche as a pocket camera.

“That’s one segment where camera manufacturers are seeing a fair bit of growth and resistance to competition from smartphones because of the durability and the portability of these devices,” Mr Ledovskikh said.

“People have also started using them in tandem with drone technology. Potentially there will be more uses for them as that kind of market gets fleshed out.”